Seven staff members on the Vancouver campus received the President’s Staff Award in 2010. This award recognizes outstanding personal achievements and contribution to UBC in three categories: Leadership and Creativity, Enhancing the UBC Experience, and Global Citizenship. Recipients are nominated by their peers and colleagues and selected by an adjudication committee.

What a colleague said: “Gurpreet’s talent in anticipating issues before they arise is a valuable asset. Whatever the issue at hand is, you can trust that it will get resolved. He truly believes that everyone, pulling together, can make the University a better place to work.” 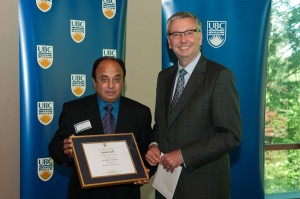 What a fourth year undergraduate said: “Not only has Jennifer helped students to plan their studies effectively year after year, she has gone well beyond her responsibilities to create a positive culture and to streamline the departmental processes for students and employees, enhancing the daily experience for many.” 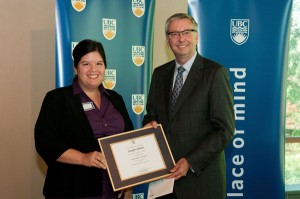 Scheduling exams for 1,700 courses and 40,000 students with great diligence and consideration for students, faculty, and administrators.

What a colleague said: “So much ‘academic’ weight is given to the ‘finals’ and the execution of it all rests on the shoulders of the exam scheduling person, Brigitte Priebe, who carries it with competence and care. It is a daunting task that few could orchestrate better than Brigitte does – with reliability, expertise, and foresight.”

Effectively managing the technologies on which research, teaching, and administrative activities depend.

What a department head said, “Dominique has, without doubt, enhanced the life of the English Department and of the staff with whom she works so supportively, the faculty members whom she assists so ably, and the thousands of students in whose behalf she spends all those hours, days, and months, and years designing and maintaining the sites so important to their academic planning and success. 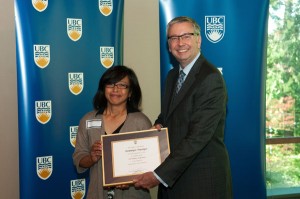 Making valuable contributions in biological safety to the UBC community and as an ambassador abroad.

What a colleague said: “As an ambassador on behalf of the University of British Columbia at numerous locations around the world as well as with foreign scientists and students to our campuses, Bruce has exhibited leadership, integrity and a willingness to share information critical to the enhancement of safe research.” 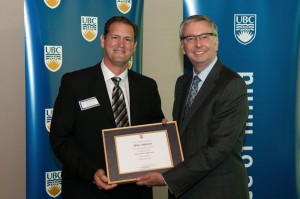 Leading the development of the brand strategy for UBC.

What a colleague said: “Thanks to Scott’s tireless stewardship, persistence, and efforts to engage key groups in the university community, UBC was able to launch a three-year campaign in September 2009 with unprecedented campus wide support. The degree to which the campus has embraced the new brand is unprecedented among other universities that have attempted such a process.” 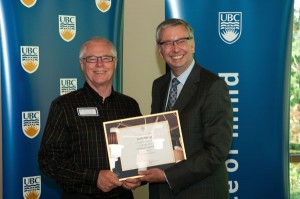 Leading by bringing out the best in people and developing effective working relationships to advance major UBC initiatives.

What a managing director said: “David has played an instrumental part in enhancing the learning and research environment at UBC through his work on major facility construction and renovation projects such as UBC Renew, the Beaty Biodiversity Building, the Earth System Sciences Building, and unique initiatives such as the Earth and Ocean Sciences Courtyard and the Lab Trek renewal program.” 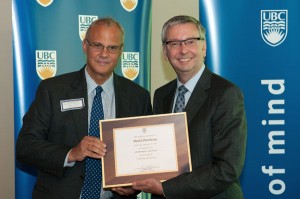 Read about the recipients of UBC Staff Awards, by year:

UBC has many award and recognition opportunities available for our Faculty and Staff. Visit the UBC Award Opportunities page for information on celebrating outstanding contributions to the University.