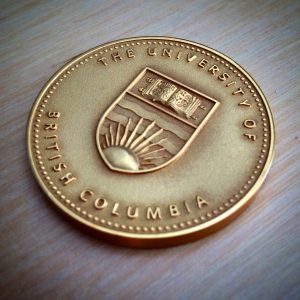 UBC presents the President’s Service Awards for Excellence and other staff awards annually, to recognize staff members who demonstrate outstanding achievement and excellence within the UBC community.

The President’s Service Awards for Excellence (PSAE) were created in 1991 and is awarded to employees for their outstanding contributions to the university. With the growth of the university over the years, including the addition of the Okanagan campus, the UBC Vancouver President’s Staff Awards and the UBC Okanagan Staff Awards of Excellence were created to celebrate a wider range of accomplishments.

Although the staff awards are associated with campus locations, every UBC staff member is eligible for one award or the other based on their work location.

The President’s Service Award for Excellence is the top award presented to UBC staff in recognition of excellence in personal achievements and contributions to UBC and to the vision and goals of the University.

Each recipient receives a medal and $5,000. Awards are presented during Graduation ceremonies.

The recipients will be selected by the President, with the support of an advisory committee.

There are seven categories of President’s Staff Awards:

There can be up to 14 award recipients per year. A staff member can receive both the PSAE and the PSA, but not in the same year.

The recipients will be selected by the President, with the support of an advisory committee.

Read about the recipients of UBC Staff Awards, by year:

UBC has many award and recognition opportunities available for our Faculty and Staff. Visit the UBC Award Opportunities page for information on celebrating outstanding contributions to the University.